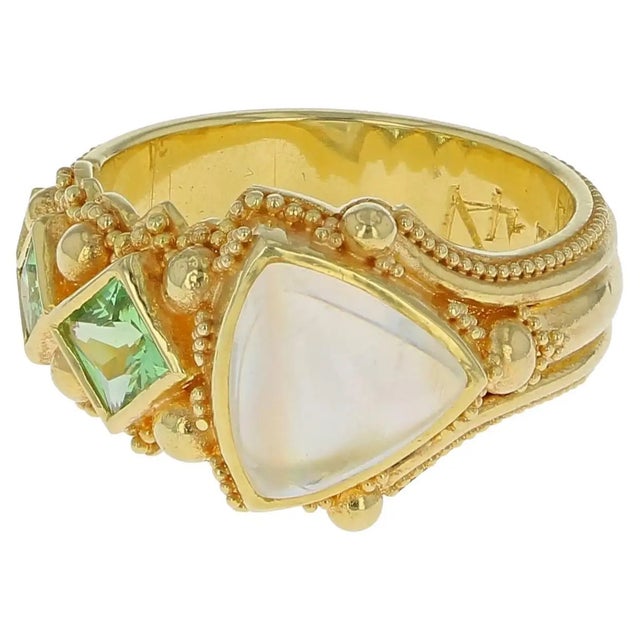 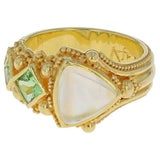 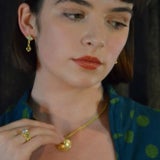 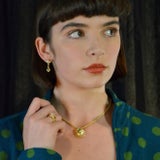 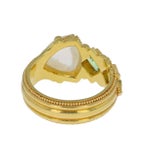 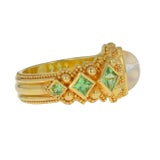 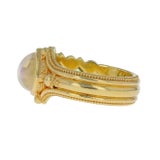 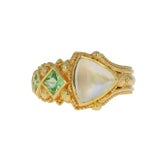 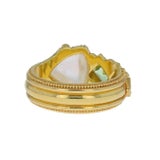 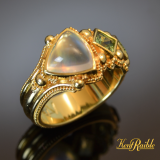 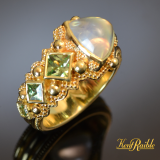 One of Kent Raible's favorite gems to work with, Moonstone has a soft glow matched by no other stone. Soft multi-color flashes are the trademark of the rare Rainbow moonstone.

Moonstone is associated with all goddesses, but especially the Moon goddesses. Resembling the Moon or "moonshine", the ancient Romans believed the stone was actually formed from moonlight. In the Orient, people believed Moonstones were actual rays of moonlight that had solidified, and that the shimmering light held within the stone was a good spirit that lived there. People in ancient India also thought along these lines, and the stone is still considered sacred in India today.

See a video of this piece here:

Kent Raible and his jewelry....

Unlike much “designer” jewelry made today, all jewelry work is done under Kent's direct supervision, with the majority of pieces made entirely by his hand. Beginning with the artist's vision and his sketch, every aspect of the work is done in his studio: alloying the metals, pouring ingots from molten gold, then rolling and drawing the sheet and wire stock used in fabrication, making of granules and small parts used to produce each of Kent's fabulously intricate pieces.

All work is handmade in the USA.

​".... Kent's pieces are the quintessence of sumptuous jewelry. Using gold, precious and semi precious stones, he brings to mind a fantasy world of sultans, sheiks and palatial surroundings. Kent's work is glorious in that it has a fantastical quality. It alludes to a time of opulence, when intensive labor was an end in itself. There's a sumptuous, sparkling, magnificence to his work."

"My life’s path is that of the goldsmith, a path of over 44 years now! To say I love my job would be an understatement! Because, in a world where few things endure, I am one of those who have chosen to celebrate that which defies the passage of time and the whims of fashion.

​My life's works draw deeply from the most ancient wells - the archetypes, symbols, and themes that have persisted for millennia. But in my hands, they take on and follow the lines of that singular, internal vision of the practiced artist - one who speaks his own language that somehow bridges the past, present, and future.

My clients tend to call me a true Renaissance man. One could say, in fact, that the pieces I create are perfect time-traveling machines! Firmly rooted in ages-old tradition, each a conscious contributor to its own time, always with a keen and anticipatory eye on what might be next." ~ Kent